Plastron Enchanted Evening - Independents Only
"Take an unusual amalgamation of psychedelic rock and wave-ripping surf coupled with a pop punk frame; slap them together and you have Plastron! Raising their glass to originality, this group of Philadelphians could be hard to compare with anyone, but could very easily be the ones others may be compared to. From the rip-roaring surf guitar of "Scary Circus" to the new wave punk of "Roctopus", Plastron challenges comparison and shows off musically with attitude and swagger. Check them out; you won't be disappointed."
Monk's Picks - Scary Circus, Rocktopus, Jet Fueled Mind

Plastron Enchanted Evening - Indie-music.com
"It’s the type of music that gets under your skin, slowly taking control of every nerve, and before you know it you are a fan, whether you wanted to be or not."

Enchanted Evening - Origivation Magazine
"In a sort of Jetson-age surf rock expressionism, Enchanted Evening comes through as a powerfully unusual soundtrack for the post-apocalyptic sock hops envisioned by the pop-culture leaders under the A-Bomb threat. Totally bizarre and undeniably poppy"

Plastron - The Honest Truth
"Plastron gets high points for marketability. They have a nice off-beat image and great sound appeal. This band is the total package and is a band to keep an eye out for"

Plastron Live - Philly Music
“their show and their stage presence was strong, quirky and unique”“Plastron, less a band ~ more of a contemporary amoeba-like thing which surrounds, ingests and morphs to the next corner of the microscope slide”“the taste of lipstick and Creme de Menthe and the feeling of her groin on your leg”

Super Sex Hero - Amazon review
"If you're looking to expand your music collection and want something fresh and new, then look no further - buy this CD now! "Super Sex Hero" offers a wide array of original music - nothing like you've heard before and defying any stylistic category or bounds."

Plastron Enchanted Evening – Coloursonic, UK
Once the surf guitar of the first three tracks has washed over you, Plastron kick sand with the appropriately titled Blast exploding into something altogether punkier, funkier, catchier and downright scarier. From then on this Philly-based, garage, psychedelic, new-wave, whatsamacallit run amok like a rabid Scooby Doo through haunted woods, vertiginous galaxies and cavernous depths. By halftime they’ve administered a master shot of adrenaline that an elephant dart of Diazepam couldn’t combat.

Plastron thrive when teetering on the edge of all over the place, the frenetic, wired rhythms channelled through their veins by some Dark Star puppeteer, laughing maniacally as they sweat to keep up.

On occasion they slip: El Gato, a whacked-out feline paean, takes the anything-goes spirit to a loose end, and occasionally you’ll accuse vocalist Lil of openly mimicking either EP-era Karen O (sans Neanderthal sex), or, during Scary Circus, the faux-innocence of Stefani. But, ultimately, the flaws add to the charm, the uncertainty as to whether everyone is in the same race barely affording the listener time to breathe.

Even when the sub-3 minute orgasm Pizaaz teases you with climax - lyrics unravelling into ‘Oohs’, ‘Aaahs’ and ‘Ngarghs!’ while clinically-possessed guitar, bass, and cans throb relentlessly behind - they shoot further still into Crusader Invader and, strong contender for song-title-of-the-year, Kick-Ass Bar Mitzvah (with Kalashnikov snares no less!). Finally, once 45 seconds of this magnificent, lurching album reverse before your ears on closer Reprise, you are plunked back at the start, dizzy but safe in the sand. Now, have a quick-deserved rest before jumping back in the rip for another ride. ~ Andy Knight

Plastron Enchanted Evening – HGB Online.com
13 tracks of exotic psychedelic rock from Plastron. Mix psychedelic rock and wild surf music with some punk pop then stand on your head and you have Plastron the original group from Philadelphia. This band is so hard to compare to anyone else out there at this time, it’s the kind of music that gets to you, slowly taking control and before you know it you are transported to another reality.

Plastron Enchanted Evening – Manic Mechanic, Undiscovered Radio
Trippy, spacey, energetic psychedelic rock, if such a thing exists. I like Plastron. It feels like their music would work well if 60's exploitation movies were to get an updated soundtrack. And being a fan of that area of film, I mean that entirely as a compliment. This is not going to sound much like any other new music you have. and for me- that means I like it.

Enchanted Evening – Guitar9.com
If you artificially, temporarily and safely lower your testosterone levels, you may be able to make it past the photos of gorgeous lead singer (Lori Geib, AKA Lil), actually open the CD and play the music - then you'll be treated to the kick axe outerspace rock sounds of Plastron, on their second release Enchanted Evening, on the Master Beta label. Based in the great state of Pennsylvania, guitarist Rich Carter and bassist Geoff Pawlikowsko keep the alt-radio-friendly music guitar-driven, although bereft of solos. Tracks such as "Blast" offer unquenchable surf energy and '60s sitcom style breaks. "El Gato" will leave you begging at Lil's scratching post, while "Electric Box" gives the twistedly imaginative listener plenty to 'grapple with'. "Rocktopus" is an ear-bending tune that serves as ideal foreplay before you "Blast" your "Pinazz" some "Enchanted Evening". This is an unpredictably fun band.

Exotic, Kick Ass Outerspace Rock is how Philadelphia’s Plastron describes their unique sound. Founded in 2000 by guitarist Rich Carter, the band has always had a sound and style difficult to categorise. Their live shows are a high energy wild ride fusing elements of punk, psychedelic, surf, rockabilly and a sound that is pure Plastron. Enigmatic sci-fi driven guitar, pulsing grooves and red-hot vocals will rock you good.

Seeing is believing but hearing is more like a total trip to far away places... untraveled...unknown....leaving you not quite the same as you were before and very far from Philadelphia....very far from home! 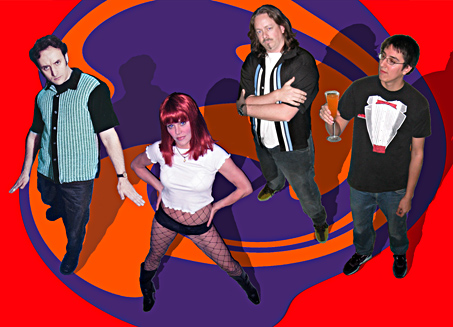